Why does it matter how children’s picture books present older characters and the aging process? In fact, those carefully chosen words and colorful illustrations of later life can create the older adult we will become. Yale University researcher Becca Levy Ph.D. has shown that people who internalize positive stereotypes of aging, from childhood, live up to 7.5 years longer than those who internalize negative age stereotypes.

Of course other sources can pollute people’s attitudes to the very normal process of getting older. Do we think kids don’t notice when adults’ anticipation of another birthday gravitates to anxiety, black humor, and ageist jokes? Or the depressing commercials, TV shows, and magazine ads that bombard us all? They do.

However, children’s picture books can either begin the process of presenting negative stereotypes at a very vulnerable and impressionable age, OR, counteract other cultural influences. Even kids who love and admire their grandparents are at risk, as research finds even toddlers speak negatively of older people and growing old.

In the same way that racism robs people of recognition of individual strengths and abilities, so goes ageism. At every age we are confronted with sad peeks at a negative future. The reality is—we grow more diverse with age and experience. Positive Aging picture books show this with powerful words and images which benefit us all, no matter our current age. 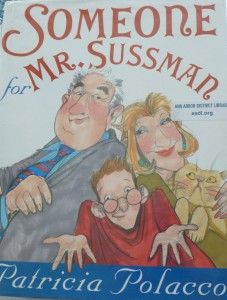 Let’s celebrate growing older as the achievement it is–let’s show older adults meeting the challenges, growing in happiness, and thriving with the years.

Books in images above:

It Jes Happened: When Bill Traylor Learned to Draw by Don Tate and R. Gregory Christie

Someone for Mr. Sussman by Patricia Polacco